So I know I have mentioned it a couple of times already, but my sweet Hubs is a bit CrossFit obsessed.

Like to the point where he is voluntarily trying to kill himself to submit his workouts to The Open. And where the subject of the Paleo diet (the CrossFit recommended eating plan), which used to be a totally hypothetical discussion wherein we would end the chat laughing about how ridiculous it would be for us to try to eat that way since he doesn’t eat veggies and I don’t really care if meat is on my plate or not, has now become a real thing that we are trying to do at least one night a week.

So it has turned into sort of a fun new cooking challenge for me. Sure, it is frustrating too because now I have three picky folks to try to feed with a long list of restricted ingredients. But I am trying to make it work. And while I have had a few massive fails. (You know who you are, freaky guacamole/chicken fiasco, from a few nights ago!) Here is one that was definitely not a fail.

This recipe is basically all protein and contains not a single grain, dairy, or legume item (Phew!). If you served it up along side a heaping pile of fruit salad or veggies of choice, you would be doing pretty darn well. Or if you just want them to snack on, they are perfectly delicious at room temperature.

I feel like I should mention here that there really may be something to the urban legend you hear from celebrity chefs about how if you get your kids to help you make something, then they are more likely to eat it. When I made these, I knew that The Hubs and I would like them, but I honestly didn’t think that The Dude would be into it. Ever since she started school, she has gotten terrible about shunning foods that she used to love (eggs being one them). But I had her help me with every step including stirring the egg mixture and I am proud to tell you that she ate an entire egg cup! So maybe kids really are more likely to eat stuff if they have some ownership on it.

Here’s what we did.

I separated out some thin deli ham for The Dude and let her place them in the cups for me while I cracked some eggs in a bowl.

Then I said, “Look! Do you see that over there?!” to distract her while I went through and pressed the ham into the cups neatly.

Then I added the salsa, salt, pepper, paprika, and cilantro to the eggs, handed over the whisk, and let her have a go. 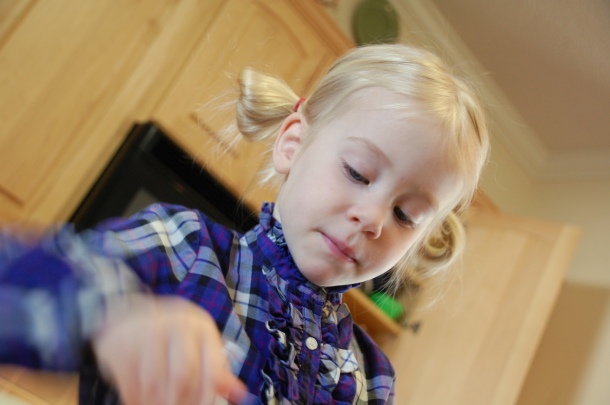 Then I poured the mixture evenly into the ham cups (a bowl with a spout or measuring cup makes things quite easy here) and baked those bad boys up.

salt and pepper to taste

Place one slice of ham into 6 ungreased tins, creating little cups and set aside.

Place about 1/4 inch of water in the remaining wells.

In a medium bowl combine eggs, salsa, paprika, cilantro, and salt and pepper.

Pour egg mixture into each ham cup about 3/4 full.

Allow to cool in the muffin tins for 2 minutes and then gently lift out with a fork and place on a cooling rack until ready to eat. (The water that bakes out of the ham can make it soggy if you leave them in the pan.)

Serve warm or at room temperature.

P.S. I would just like acknowledge for anyone who noticed, that yes I was gone for a couple of weeks (It really bothers me for some reason when people start off their blog posts with “sorry I have been MIA recently…”). Believe it or not, I still haven’t burned out of this little hobby of mine yet. Rather, someone with whom I was extremely close and has been one of my best friends since I was a teenager passed away a week and a half ago. It was the first time that someone I had a very strong relationship with died, and it has obviously left me reeling. Basically, I just needed a little time to get some motivation to get back in the normal swing of things. I will probably devote a whole post (or ten) to her at some point when it will be something I can write about without it sounding like some sort of a weepy obituary. In the meantime I will just  keep on squeezing my kids every chance I get, telling the people I love that I love them, and cooking up a storm. I urge you to do the same.

P.P.S. Sorry. I couldn’t end the post on such a sad note. This is supposed to be a fun place. So here is my favorite picture of The Dude from this little photo shoot.

Now if you will excuse me, I gotta go give that silly face a kiss.

This recipe reminds me of that episode of Friends where Rachel cooks the traditional English trifle for Thanksgiving.

Do you remember it? Monica lets her make the dessert all by herself. Then just as she is getting ready to serve it, everyone asks her what is in it. So she starts going through the list of ingredients. It all sounds pretty basic at first with custard, jam, etc. and then she says, “…and beef sauteed with peas and carrots.”

I love that. It makes me laugh every time (Oops. Did I fail to mention that I was a big Friends nerd?)

This smoothie recipe kind of looks that way. We start off with blueberries, white chocolate chips, Greek yogurt, and milk. And then toss in a little spinach and white beans.

Now the spinach probably isn’t that much of a shock. Spinach is very easily hidden behind berries in a smoothie (come on, Moms…evil laugh with me!), and people have been doing that for forever. But I agree, the white beans do sound a little nuts. Let me tell you though, it is awesome. It makes the smoothie unbelievably creamy.

I tried to tell you that I wanted to get more protein in us at every meal. And since the girls and I eat a smoothie for lunch at least once a week, I wanted to see if I could go a little bit above and beyond the Greek yogurt.

And if you are worried about the taste, the proof is in the trifle. Check it.

Do these faces look grossed out to you?

Now I realize that the white chocolate seems a little extravagant, but you aren’t really using that much. They add a nice sweet richness to it. Plus, look at what happens when you tell your Dude that there is white chocolate in her smoothie.

Place all ingredients in the order listed into the blender. (The spinach always goes in first, just in case The Dude walks in and sees what you are making. It will get hidden first.)

Blend on high for about a minute until no lumps remain.

This may have a few wonky ingredients, but it definitely does not taste like feet.